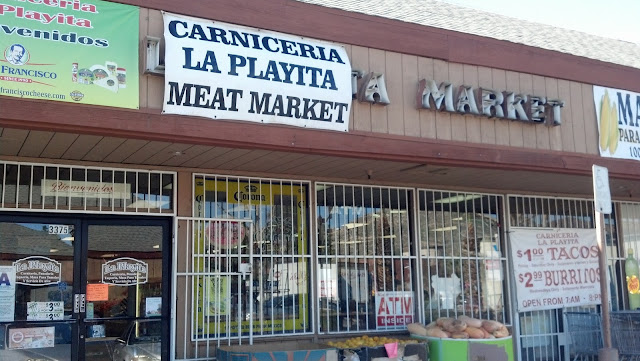 Don't listen to Rick Perry. California is not in decline. I mean, yeah, I'd fucking never start a business here. At least not one where turning a profit is a part of the mission statement. Nevertheless, the perks are plentiful: the weather, the women, the daily reminder of liberalism's many failures. Perhaps paramount to all of that, though, is the food. The food is killer, and in the Golden State all of that food is furnished to yearning bellies by the loving, caring, capable hands of Mexicans. It's true. I don't care if it's American soul, Creole, Italian, shitty fake Italian... Hispanics are in the back handling business. Hell, I wouldn't be surprised if they tried their hands at Thai from time to time.

(Don't mistake my intent. I do not consider this a negative. Back when I used to suck dick for money wait tables for a living, it quickly occurred to me that the Hispanic omnipresence in the kitchen isn't just essentially universal, it's universally essential. Fact of the matter is that mis amigos (y amigas) work hard as hell, provide a better service and generate a superior product than the white kids that waste four years and a hundred-grand on culinary school and then piss themselves their first time on the line. While the Delaney Family patriarchs and their ilk lament at length the changing face of capitalism's lower rungs, you'd be hard-pressed to find a fresh-faced, front-of-the-house wheyface that doesn't side with me on that point. Rest assured that when they forget to ring in that filet, they see Miguel and not Michael.)

Thus, it should go without saying that California (esp. Southern-) exists as the epicenter of incredible Mexican cuisine. Nowhere else comes close. It's an indisputable fact of life in America that the farther one travels from SoCal in any direction (but eastward, especially), the further diminished the returns become. Really, once you pass Phoenix, you'd have to bastardize the very definition to justify calling it Mexican food at all. To their credit, the locals don't. They introduce you to Tex-Mex and pretend they haven't just replaced complexity of spice with quantity of nacho cheese. Once you get to the muddy banks of the Mississippi, 'bout the only place you're going to find a tortilla is at a Taco Bell, and the only place you're going to find someone who can properly roll one is... well... you're probably fucked.

I love Mexican food. If I were to properly diagram my diet in the shape of a pyramid or plate, I'd put chimichangas wherever the bread should be. I know what I like, and I like to think I know what's good. In my ceaseless quest to find a burrito truly supreme I've come to a couple conclusions. First, I'll be straight about this: Mexican food in Riverside is just as good (if not better) than that found in L.A., O.C., or San Diego. That's fact. While coastal natives and emigrants will claim snob-nosed superiority, cite proximity to the border or proportion of populace, and cling to every false illusion otherwise, nothing they ever recommend is anything I'd ever write home about or drive twenty minutes from home to try again. (I blame this on Hispanics' tempered contributions to larger numbers of bland white people palates littered throughout the Southland from Santa Monica to Solana Beach. You can surely find the realness in some parts of these places. However, to do so you must venture past where the sidewalk ends. Angels' fans are (justifiably) afraid of el barrio, and they're unworthy of its treasures.) Secondly, regardless of where you are, quality de la comida is inversely proportional to the number of places from which you may procure it from a given establishment. By that merit, Taco Bell is worse than Del Taco is worse than Santana's is worse than Tio's is worse than any carniceria anywhere. Holds true.

Alright, so let's get to it.

Taqueria La Playita - located inside La Playita Carniceria y Panaderia - is two blocks from UC Riverside and a stone's throw from the legendary intersection of Blaine and Iowa. It lays tucked away in the corner of the same small strip mall that facilitated every late-night beer run and after-work tall can I sought while in college. Yet, until last summer I was somehow unaware of its existence. Were it not for for a precariously-placed, handmade street sign that simply read "Tacos", I still would be. It takes very little to spark my interest, and it takes even less to feel it's warranted. As soon as I set eyes on La Playita, I knew it was the real deal. There were bars on the windows. There was a temporary banner draped over the busted-ass channel letter. My car was the nicest one parked out front (too nice to be pictured and kill the vibe). In my experience, griminess on the outside ensures authenticity on the inside. I had to have it. 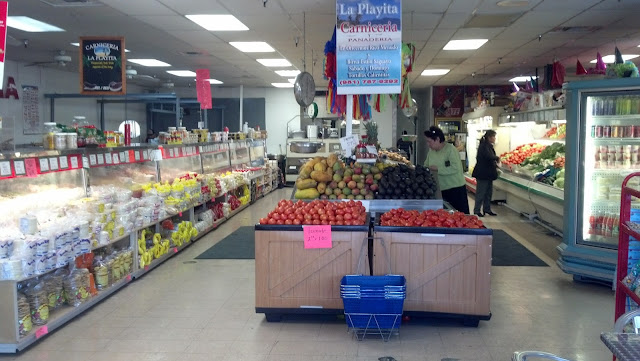 I had to pull up one step inside the door, though. I had to slow my role. I was like.. goddamn. I mean, could my mind's eye ever be more exactly replicated?? No chance. Left to right you're looking at some real-ass marinated meats, about every kind of corn or flour product you could ever ask for, and a pretty respectable produce selection. There was more grocery fare further to the right should one be inclined to cook a meal for themselves like an adult or whatever. But I was here to buy a burrito, so obviously I ain't even trying to hear that noise. Once the shock of satisfaction subsided, there was that smell. That indelible smell. I was reminded of that for which I came.

My olfactory led me leftward. And, in the words of the Nicholas Bamover Vanover... BAM. 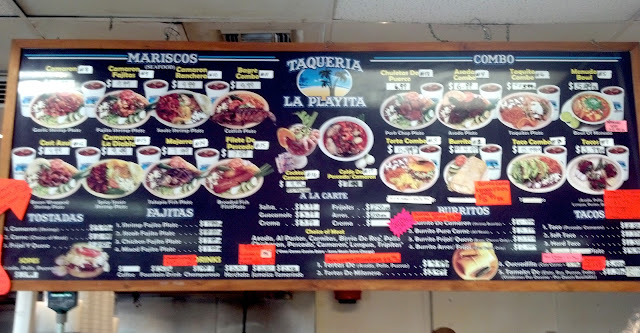 Before me stood the alter to which all men of merit must trek and pay tribute. Whatever portal might exist between a man and his maker surely travels by way of this board. All the classics are dutifully represented: menudo, deep-fried tilapia served whole, camarones ala diabla. Everything looks bomb as hell. Other than that, however, I can comment on none of it. I've literally only ordered burritos here. This place has their burrito game on fucking lock, and they know it. (Go ahead and try to order one with no rice. You're getting fucking rice. Not because you want it, but because you need it). I'll switch it up in the meat department when I'm feeling locito, but otherwise I see no point in straying from what's tried and true. Doing so is made more difficult in the face of microeconomic argument. Allow me to guide your eyes to the board overhanging the counter where orders are placed. 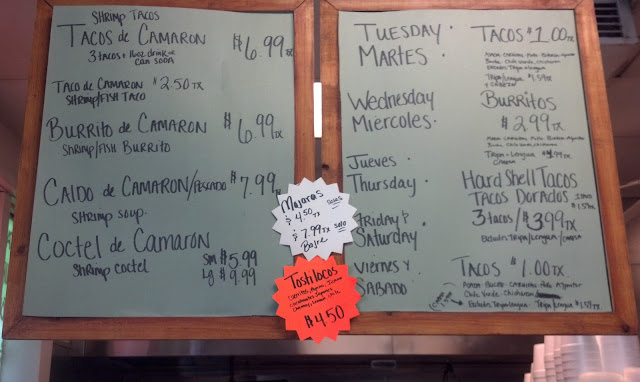 Oh dang. Let it be known that Taco Tuesday is a thing of yesteryear. Burrito Wednesday is the wave of the future, the next logical evolution in the effort to give fatties more for less. Whereas deals like this usually specify skimpy rations, there apparently exists no direct translation for the term "portion control" at La Playita, because dudes get mighty liberal with the dispensing of product. These are Bernie Sanders burritos, and should you make it in on hump day as I did last week, you can get one for $2.99tx. Try as you might, you cannot step to that. Furthermore, this place has the added benefit of being a full-on grocery store. Factor in the fact that they stay fully stocked with Mexican Coke (wtf is high fructose corn syrup?), and it's a done deal. Consider that it's the middle of the workday in the middle of the workweek and you've obviously got no reason not to accompany your behemoth of beans and rice with a 12-pack of Modelo instead, and La Playita's unfuckwithability comes sharply into focus.

Then realize they still have one of these things. And it functions. Infinite yes. 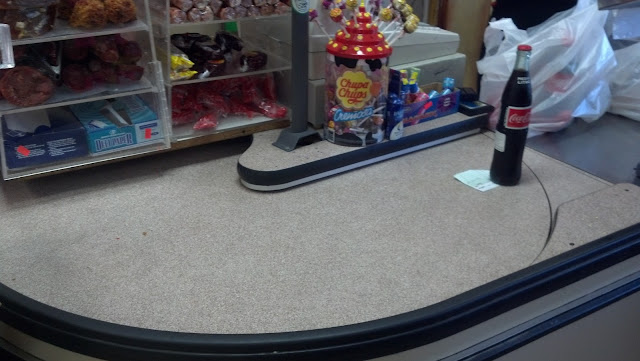 Now, as mentioned, I come here to fill my belly. That's always first and foremost. It'd be understandably easy for me to turn a blind eye toward the service component. Yet, I think for everyone it's something of which we're always at least subconsciously aware. I never feel like corners are cut here. The cooks always ask if I want my burrito with all the fixings ("con todo" as they call it), even though my Spanish sucks and it's really a rhetorical question to begin with. The cashier always offers to open my beverage for me, and despite the very clearly displayed sign at the register stipulating that all debit transactions will be charged an additional $0.75, it seemingly never applies. Is this five-star service? Who knows or cares. Point is I always  feel like my patronage is appreciated, which is weird considering I simultaneously feel like I'm the one that should be appreciative.

I mean, look at this burrito below! I'm a man's man. I ain't got no dainty hands, but they look positively feminine whilst wrapped around this goliath of girthy greatness. Look at that bite. That's a full ass bite, and I barely put a dent in that piece. This thing is Shiva, destroyer of worlds and appetites alike. And you can get all of that - PLUS a cane sugar Coke - for $5.02. Barely a dent in the wallet. 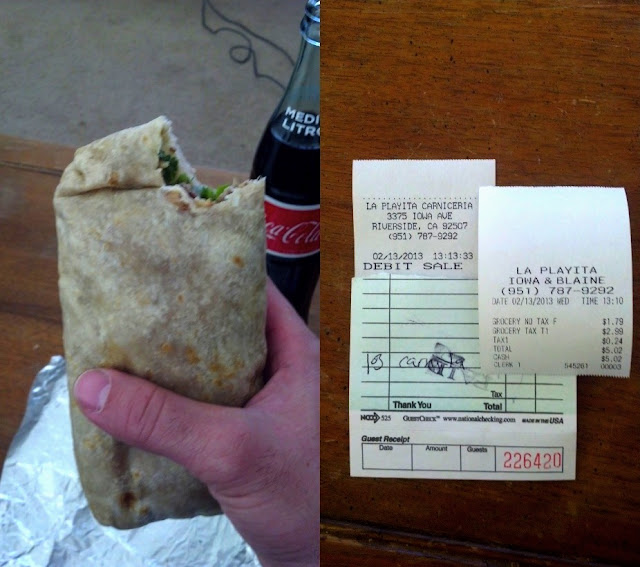 They hook it up. That much is clearly evident. On the real, though, how is it? Scroll down, B. Scroll down. 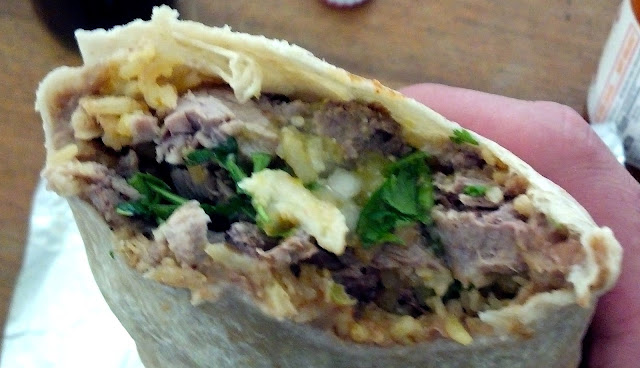 Dear God(?). You got the tortilla, warmed briefly and stretched to its very limit. There're the beans and rice coalescing into a starchy dermis, insulating all the major players. In the center they hit you with the cilantro, the onions, the salsa and your choice of meat. On the latter matter I generally keep a steady rotation of carnitas (shown, bomb as hell), pastor, carne asada, and chicken tinga (not chicken regular!). For anyone looking to prove their cultural orthodoxy, I've been assured by the dude to whom I trust these matters that their tripas and lengua are on point as well. What's possibly most impressive about La Playita, what most speaks to their superiority, pertains to a personal pet peeve of mine and an issue I feel is too often overlooked when evaluating these sorts of establishments. Of the many times I've now visited their taqueria, I've never once had a burrito fall apart on me. At least not catastrophically so. These guys are professionals, and you can't put a price on that.

So, the next time you find yourself lost in the IE, let your stomach guide you to its north star:

(Final notes: In addition to Burrito Wednesdays, roll down Friday through Sunday when they feature their special salsa cart. Hit up that light green jalapeno-based mess. It's hot fire. And regardless of which day you visit, make sure you've cleared 1-2 hours in your schedule for a nom-nap afterward.)

Posted by kyle james delaney of riverside ca at 6:29 PM No comments:

an extemporaneous collection of riffs on anything, anytime.
if you like this page you may also enjoy
my dog
music
food
politics
drunken story-telling
salvageable aspects of the Inland Empire
sports historically dominated by white people